Centro, the Passenger Transport Executive (PTE) for the midlands, has long recognised that as part of providing world-class facilities to passengers, you must also provide them with the latest travel information.
Case Study by Journeo 1 December, 2017

Centro, the Passenger Transport Executive (PTE) for the midlands, has long recognised that as part of providing world-class facilities to passengers, you must also provide them with the latest travel information.

The rollout would begin with Centro’s new state-of-the-art bus station, due for opening in 2011. The new bus hub was designed to not simply be a bus station, but a transport interchange, giving passengers multimodal information and enabling them to plan their onward journey.

The new Customer Information System (CIS) would be expected to work with new displays manufactured for the project, and for existing screens that already formed part of Centro’s information estate. Centro also commissioned AECOM to complete a good practice review of information provision.

Building on the report produced by AECOM, 21st Century Passenger Systems Ltd successfully tendered to supply the PTE with the fourth generation of its EPI (Electronic Passenger Information) Content Management System (CMS). Developed by 21st Century’s in-house software development team, the powerful CMS comes with a host of features that enabled Centro to deliver an industry-leading CIS to it’s passengers.

The scope of the project meant that the CMS would have to work across a variety of display types encompassing not only differing sizes and layouts, but also displays that already existed on Centro’s information estate. Fortunately, 21st Century were able to make this happen from their Coventry base using their own software and hardware specialists. This delivered significant savings to Centro, as it meant the PTE did not have to replace their entire passenger information infrastructure.

EPI 4 has been designed to be compatible with a host of transport industry data standards including, but not limited to; TransXchange, SIRI, NaPTAN, ATCO-CIF, NPTG and many more. As a result, Centro were able to display not only bus information, but rail information in unison, making the vision of being able to plan onward journeys from a single departure board a possibility.

No-one knows public transport networks like local authorities and PTEs, so control of EPI was passed over to Centro, enabling users to log on to the web-based portal with pre-defined permission-levels. From the online interface, users are able to take control of screens either estate wide, in clusters (defined by the users) or even on an individual basis. An authorised user is able to adjust screen layouts, handing over space on the display to show public announcements and advertising content, which can take the form of static displays or videos. The Carousel editor enables users to adjust which adverts are shown.

EPI also comes with a host of other features. The customisable display appearance allowed the displays to be updated to reflect Centro branding, and integration of the RNIB React 3 system means that the information is accessible to as many people as possible.

Wolverhampton has a population of more than 250,000 and it’s new bus station opened in July 2011, with all the displays controlled by 21st Century’s EPI.

Since the original CIS rollout, the relationship between Centro and 21st Century has continued to build, with the Passenger System specialist providing displays and deploying its industry-leading CMS throughout the PTEs jurisdiction.

The feature-rich CMS is continually developed in order to respond to customer’s changing needs, in what is a demanding environment, where clear information can be the key to a smooth-running network. 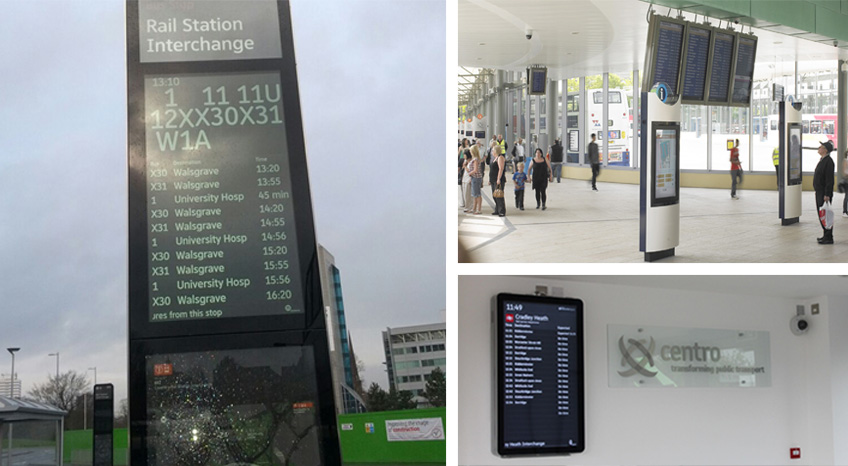