In September 2010, Nottingham City Council unveiled the newly refurbished Broadmarsh Bus Station. The Council had wanted to ensure that this transport hub could meet the need of its residents and visitors.

A key part of the refit was increasing the amount of information about bus times that travellers received while waiting in the bus station. 21st Century Passenger Systems Ltd were asked to provide four, large format TFT departure screens, which have been placed in a prominent position. In addition to the departure screens, the rennovation also included new signage and CCTV; a new PA system and lighting.

Whilst Nottingham usually has a population of 300,000, this can swell considerably to more than 700,000 when people from the wider urban area and the transient population from the two universities is taken into account. With a bus station that could potentially serve such a large amount of passengers, it was decided that impact was needed to provide travel information to the public.

The team from Nottingham City Council and Broadmarsh bus station selected screens that would show passengers the bus arrival and departure times, something that had previously not been available. The displays are monitored via SignMinder, a sophisticated combination of hardware and software developed in-house to report on the screen status, o ensure they are always working to peak performance.

21st Century also supplied its Electronic Passenger Information (EPI) system. This is a web based system that allows bus managers to manage all public transport information on display. They can control what is sent to any of their displays, including images, videos, text and voice.

Andy Gibbons, Public Transport Manager, Nottingham City Council, said, “The new large screen departure boards provided by 21st century are the icing on the cake. They give Paul, our bus station manager, a full management system. It allows him and his staff to manage service bay changes at short notice and place text messages for bus station users in a clear, easy to read format that satisfies the needs of the visually impaired.”

Joe Robinson, Nottingham City Council’s Public Transport Officer, was the person that liaised the most with 21st Century Passenger Systems Ltd about the screens. “21st Century were very professional to work with. As well as setting up test departure boards at Broadmarsh Bus Station for us to trial, they also provided several demonstrations at their factory. This showed us in practice the different options open to us with the displays and enabled us to make the right choices.”

The project delivery was assisted by a dedicated team within both the bus station and the local authority both working to provide a suitable solution.

21st Century continue to maintain the displays and ensure they are operating to peak performance. This has been the basis for a growing relationship, which has seen 21st Century provide further elements to the Broadmarsh information estate. 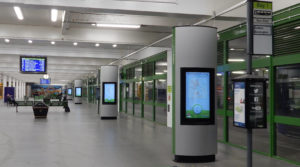