“By working closely with Chester West and Chester Council, we were able to integrate new solutions that will benefit their day-to-day operations, assisting them with both revenue reconcilliation and enhancing safety.”
Ted Beatson, 21st Century

As part of the multi-million-pound development of the new Chester Bus Interchange, Chester West and Chester Council were looking for new display signage and a cutting-edge CMS to control the information being distributed to passengers.

The Council was also looking to increase both safety and operational efficiency by including a stand charging module and emergency warning system.

The 21st Century CMS (Content Management System) has been in existence for over 15 years and is constantly being developed to increase the capability of the system and deliver more features to users.

In addition to the core features of the 21st Century CMS, that allow customers to choose from pre-configured display templates, add elements from a media carousel and consume and intelligently distribute the correct real-time departure information to displays throughout their estate, Chester West and Chester Council chose to take advantage of some of the system’s optional modules.

The Council also wanted to increase the safety of their interchange and so opted to include the Emergency Messaging module. Integrated with the Interchange’s fire alarm system, as soon as an alarm is triggered the screens display evacuation information and can be configured to give information such as the nearest evacuation point. 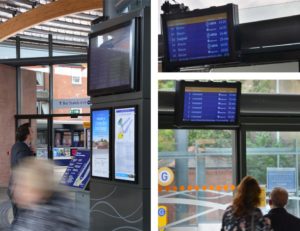 21st Century worked closely with Chester West and Chester Council to ensure the Interchange was ready to go live as scheduled. The CMS has been well received by the operational staff within Chester Bus Interchange; with increased automated processes freeing up their time, it has enabled them to concentrate more on customer service and passenger satisafaction.